“The C word”, I used to joke. Flippant was my middle name. Then my friends started getting cancer and even my own breed of arrogance of youth knew that the feeble joke had died. Life will rip flippancy out of all of us eventually.

I have been committed, right? Yes, yes, in every sense of the term: jails, institutions, and marriage. I have been engaged a fair few times and did the knot tie. Once I even had the same home address for over five years so don’t you tell me about commitment, I already know.

The knot was untied, the trail of rings and drunken proposals left behind in a reverie of all things untrue that couldn’t last because they didn’t exist in the first place. Every relationship I entered in one go saying “I DON’T WANT TO COMMIT BE MINE, BE MINE RIGHT NOW” and none of them were right.

Something recently stopped me in my tracks. It was a story about an older woman who had been married for decades and she was explaining that commitment isn’t about the highs and the lows, it’s about staying put during the in-between bits. The bits where nothing remarkable happens, something about the tranquil flow of life.

I spent any kind of in-between bits doing a character assassination of the current “what’s his name again” I was convinced I couldn’t live without, until I did. “Don’t be boring”, I would tell them, for if they dared it was free reign to play a game of cat and mouse – a display of cruelty for cruelty’s sake.

I would tear married man to shreds and wonder why his wife hadn’t left him. That pitiful woman, how can you have such little respect for yourself, hanging on to someone who so clearly loves me. I bet he loves me like he told all the others he did. Fools, all of them, the fools. During Round One of our demented merry-go-round I screamed in his face: “what the fuck do you know about commitment? Fuck all! All you do is run from one to the other, then go home to your wife and your kids and lie, all you do is lie, you make me sick”. I wanted my words to be acid burning his soul. Sick fucks, the lot of them.

Then I read that, about the boring bits.

Maybe that’s what it’s like – for her. Sticking to someone she committed to: when he was away, when they were bored, when nothing happened, when everything happened, she was still there. I knew he wasn’t capable of reciprocating, as he was in my bed, things were going good at home, but the reason for her staying hit me hard.

I realised that commitment means standing by someone and allowing, giving, letting them have their personal freedom, whereas I see enslavement. Letting your husband stray because he is your family, and you have children, and he is there when he needs to be and he can have his frivolous, temporary, poison-spewing fun. She’s one of many, he always comes home to me. It is who he is. Accepting another person whole.

Once, he was on his way out and she stood in his way and asked him not to go, but he went. She was still at home when he came back.

I would never know what it is like for him to come home to me rather than from me.

I would never know what is it like to spend sleepless nights in worry about a third person dually created or even sleepless nights worrying about the other. In sickness and in health? I am sick enough for two.

Once, when we were going out for dinner and I had asked him not to lie about me at home, he told her we were meeting for dinner, again. “Oh don’t get involved with her because she is vulnerable – she’s alone, she doesn’t have a family”.

I used to think commitment was sinking my anchor of issues into another broken soul and taking as much as I could, as fast as I could. I was always there, in his face, and the poor sucker felt loved and overwhelmed – star and villain of my show in unequal measures and then press “next”.

So yeah, it stopped me in my tracks. 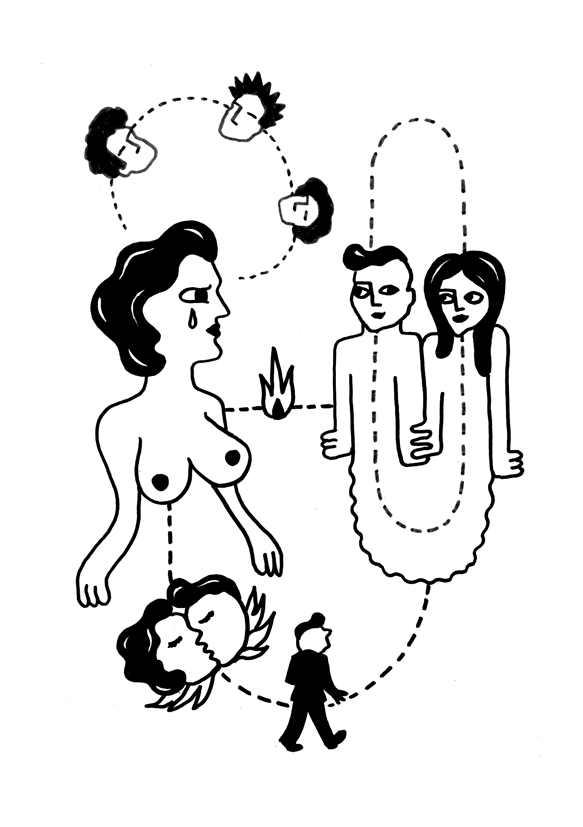